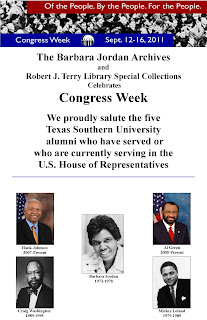 Did you know that this September 17 marks the 224th anniversary of the signing of the Constitution?  To mark the occasion,  September 12-16, 2011 has been established as Congress Week.  Texas Southern University Special Collections and the Barbara Jordan Archives are members of the Association of Centers for the Study of Congress, a professional organization of information specialists that support and promote a wide range of educational and informative programs for students, scholars, and the public at large about the history of Congress and the process by which public policies are set.  To learn more about the ACSC and Congress Week, click here.


TSU and the Barbara Jordan Archives are proud to present our 2011 Congress Week exhibit, which salutes the five TSU graduates  (Al Green, Hank Johnson, Craig Washington, Mickey Leland, and of course, Barbara Jordan) who represented their constituents in Congress.  To see our online exhibit, click here.  We will also have a physical installation of this exhibit at the Robert J. Terry Library in the main lobby during Congress Week.   Join us in celebrating the lives and achievements of these outstanding TSU alums!
Posted by Barbara Jordan Archives at 8:18 AM No comments: