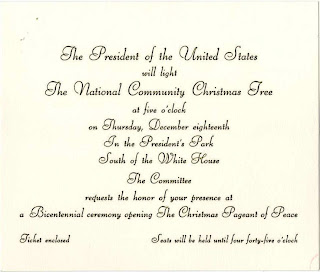 As the holiday season draws near, we are reminded that for many of our public servants the demands of the job never stop, and Barbara Jordan was certainly no exception. Her invitation files are full of requests for appearances at official functions, social functions, organization get-togethers and private parties at all times of the year, not just the holiday season. Here is one of Jordan's invitations from President Carter to the 1976 lighting of the National Community Christmas tree in the President's Park in Washington, D.C. Here also is a 1973 invitation from the American Postal Workers Union inviting Jordan to one of their holiday functions. These 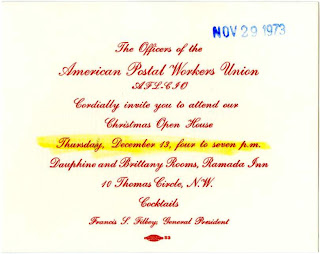 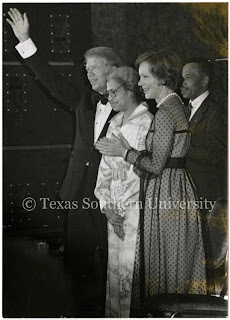 Today is the 55th anniversary of one of the seminal acts of civil disobedience in America's history. On December 1, 1955, Rosa Parks refused to give up her seat on a Montgomery, Alabama city bus to a white male passenger. Parks' refusal touched off the Montgomery Bus Boycott, leading to the historic United States Supreme court decision that declared the Alabama and Montgomery laws requiring segregated buses to be unconstitutional. Following the court case, Parks (a seamstress by trade) went on to become a beloved public figure, lending her name and voice to various civil and human rights issues for the next several decades. Parks died in 2005 at the age of 92. Today, the Rosa and Raymond Parks Institute for Self-Development continues to provide opportunities for African-American youths for education and self-growth. 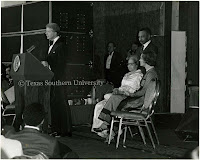 These photographs of Rosa Parks are from the Barbara
Jordan Archives, and were taken at the Congressional Black
Congress dinner on October 6, 1978. The dinner was attended by a "Who's Who" in the African-American community (both in and out of politics); Parks was photographed with then-President Jimmy Carter and his wife, former First Lady Roslyn. Enjoy!
Posted by Barbara Jordan Archives at 9:27 AM No comments: