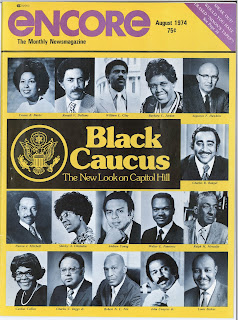 We hit a snag today. We are in the process of trying to get the scanner in the Barbara Jordan Archives room to operate. We want to get pictures of our findings, such as the lovely high school yearbook made available for our readers and fans to see on this blog and on her facebook page. Mademoiselle informed me today that the processed portion of the Barbara Jordan Archives is roughly 366 linear feet. In other words, if you add together every archival box containing her documents, it is almost the equivalent to the length of a basketball court.Within Barbara Jordan's papers, we were able to discover a newsletter addressed to Ms. Jordan highlighting an African American golfer. Mademoiselle was amazed that black golfers other than the well known and almost infamous golfer Tiger Woods were attending the master series, even back then. 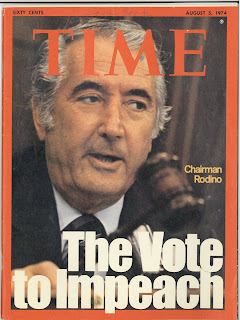 Barbara Jordan had collected copies of Newsweek where presidents had made the front page headlines. We also found a monthly issued magazine titled encore and dated August 1974 with Jordan on the cover. We also found an old Time magazine dated August 5, 1975 where she wrote "save book" in her own hand ontop. The cover of the magazine had Chairman Rodino on the front, and was titled The Vote to Impeach.In the magazine, Barbara Jordan highlighted everything that pertained to her in the article and in the impeachment.

There was also a picture of Barbara Jordan in the article. The highlighted portions were " Texas Democrat Barbara Jordan loomed and boomed like some elemental force, her cultivated accent and erudition surprising each time she 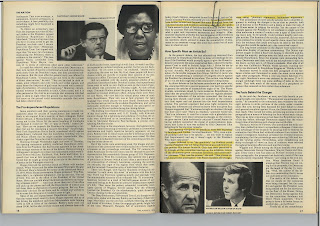 spoke..." "...The opposing viewpoints on specificity were best expressed by Sandman and Jordan." "...Jordan (referred to as "the gentlelady" by Rodino) noted that the President was not being deprived of any information or due process. His lawyer James St. Clair had been permitted to sit through all the committee hearings on the evidene, receive all the documents given committee members, and cross-examine witnesses. "That was due process," she said. "Due process tripled, due process quadrupled."

The Nixon loyalists, she charged, were using "phantom arguments, bottomless arguments." How facinating to see quotes of her involvment in the impeachment of President Nixon in this old Time Magazine. Jordan had 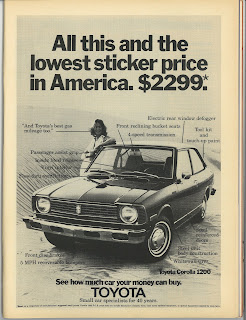 used a paperclip as a placeholder for the article. On a lighter note, mademoiselle and I wished we could go back to the days when a Time magazine was only going for 60 cents. We also had a laugh when we saw an old picture of a Toyota Corrolla 1200 advertisement in the magazine with a sticer price of $2,299.
Posted by Barbara Jordan Archives at 10:53 AM No comments: 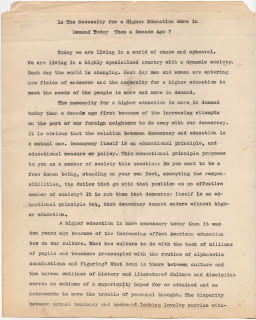 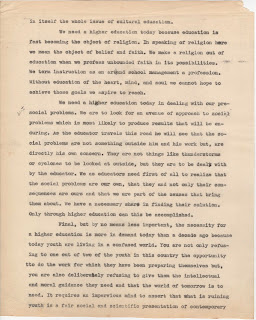 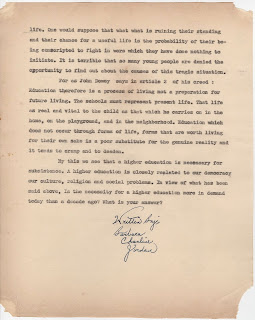 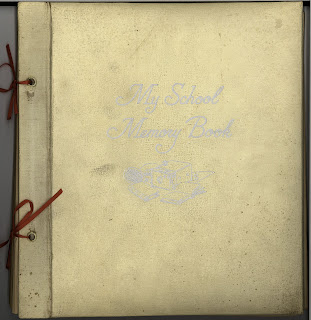 The purpose of this blog is to highlight the many facets of Barbara Jordan's life (1936-1996) and show how noteworthy they are. When we, began processing her papers within the TSU library, we realized the many connections, trials, and tribulations she overcame, and decided our thought process in uncovering these treasures was essential. Rather than settling for a more classical means of documentation, we decided that we would document our findings in a more futuristic manner in the year 2010. Through this blog, we will enable others to look into the life

of Barbara Jordan's archives through our eyes. For privacy purposes I will refer to myself, the assistant archivist as (lady), my co-worker the processing archivist as (mademoiselle), and our boss as (supervisor).Last week was our first week processing papers within the archives, and we made a list of goals and future project to present to supervisor. In addition, we made a list of supplies needed, got music going, put in a request to re-organize the Barbara Jordan showcase room to make it more spaceous so we can display more of her things, discovered the capacity of her collection, and much more. Upon uncovering Barbara Jordan's high school yearbook, we decided to start our blog with her highschool years. So here we go, unveiling the trials and tribulations we will face day in and day out processing the remaining Buried Treasures within the Barbara Jordan Archives, and bring them to light so you can value her life's journey as we do.


The Barbara Jordan Archives would have been completely processessed by now if it weren't for the prior processor's death. Now we have picked up where she left off 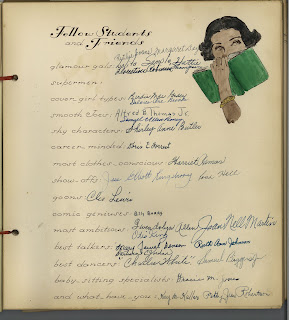 , and one of the first things we discovered was Barbara Jordan's yearbook dated 1952. It is titled "My School Memory Book," and it is cream colored, worn, and whole punched with two wholes. Barbara Jordan binded the pages of her yearbook together with red ribbons. I thought this was interesting because I felt that maybe she chose red ribbon due to future aspirations of joining Delta Sigma Theta (even then) in college. I wouldn't be surprised if that was the case, given some of the things she noted in her yearbook. Anyways, there are printed drawings of women achieving things on every page throughout the entire book, the things they are shown achieving are in correlation with the titles of the pages in the yearbook. I thought it was nice how she took the time, as we seldom do today to paint all of the women within her yearbook. She painted them with watercolor, and all the women were painted African American, and with elaborately colored, feminine attire.Anyways, on the next page, she made a list of all her friends and their personalities. For instance, she listed the glamor gals, shy characters, career-minded individuals, goons, best talkers, most ambitious, best dancers, show-offs, etc. Under each title accept supermen, she listed at least one name. On the next page she wrote in her own elegant penm 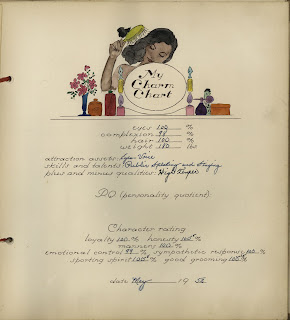 anship her charms such as eyes, complexion, hair, and weight and she rated them. She felt her attraction assets were her eyes-voice. Her skills and talents were her public speaking and singing, and her plus and minus qualities were her high-temper.On the next page, many of her teachers signed her yearbook, then on the next page she listed under the page titled unfinished business her hobies which she said were reading, and riding her bike, collections which she said were pictures and medals, fashion fads, which she said were poodle cut, pony or horse tails-short hair in general, and loud colored shoes. Then at the bottom of the same page, it says future which she explained was "to become an outstanding and competant 'lawyer,' To change-M-I-S-S" to "M-R-S." someday, To go to the University of Michigan Law School---someday, To make a good record at T.S.U. On the next few pages she had students sign under pages titled keys to culture, Our music makers, Teen topics, and Tops in Athletics.Under school holidays I was able to draw a connection between Ms. Jordan and myself because I recently took a trip to Chicago the weekend before we uncovered this year book. Jordan describes her trip to Chigago as "the most--wonderful, enjoyable, exciting, adventurous, adorable, unforgettable, rapturous----it was just the best doggone trip i have ever had." I felt similarly about my trip to Chicago. 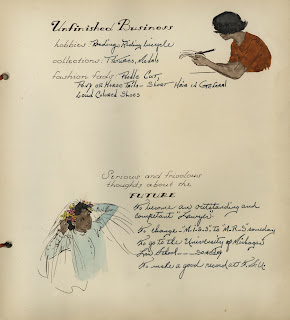 While I traveled for a friends wedding shower, she traveled to Chicago for a National Convention where she represented Texas in an oratorical competition in which she won first place. In her yearbook she placed the speech she used to allow her to win first prize. I was able to uncover this bit of information because she pasted the news article written about her and her win inside of her year book.It was obvious throughout the rest of the book how well known she was at her school. She had pictures of many of her classmates in the book as well as many signatures and quotes written by classmates and teachers. Unfortunately, some of the photos were ripped out by someone who discovered this book before us.


Still, I thought it was cool how well documented her high school years were in this Memory Book, and we are proud to have discovered it in fairly good condition after 58 years. She got all of her administrators' signatures, and her favorite teachers 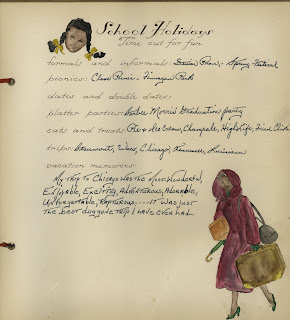 to sign.Of course mademoiselle looked at the yearbook as well, and in the commencement program, she was able to find her great aunt's name. We were excited about this. She said she was going to speak and record her aunt speaking about her high school experience with Barbara Jordan at Phillis Wheatley Senior High School, and add it to the Barbara Jordan Archives because her aunt is still living. Mademoiselle and I couldn't help but note how connected Barbara Jordan was, and how small this world is. Isn't it odd that the commencement's theme was "The Negro Brings His Gifts."--something to think on till next time.


Posted by Barbara Jordan Archives at 10:47 AM No comments: