The Barbara Jordan Archives was honored recently to be approached by the Fifth Ward Community Redevelopment Corporation to help with an art work project involving the late Congresswoman. Since 1989, The Fifth Ward CRC has made strides to revitalize and reinvigorate Houston’s historic Fifth Ward through community service, housing developments, art installations and beautification projects, and partnerships with businesses, philanthropic enterprises and political representatives.

The Fifth Ward CRC was recently involved in a three-day service project in partnership with Starbucks Coffee Company and the Fifth Ward community.  The event took place during Starbucks’s Leadership Conference held in Houston that was attended by over 10,000 volunteers—5260 of whom helped to transform part of Houston’s historic Fifth Ward along Lyons Avenue.  The volunteers worked on projects such as clearing vacant lots, power washing homes, paint scraping, and working with small business owners on their store exteriors, just to name a few.  The Fifth Ward CRC helped design an art installation in a Metro bus shelter paying tribute to Congresswoman Jordan, Congressman Mickey Leland, and other movers and shakers of the Fifth Ward’s rich and vibrant history.  The Barbara Jordan Archives contributed an iconic image of Jordan taken in the Fifth Ward from the late 1960s as her political career was just beginning.  The Fifth Ward CRC project was very meaningful to Jordan’s life and legacy as she was born and raised in the Fifth Ward—and in fact, Jordan’s law office was right on Lyons Avenue in the early 1960s.

We salute the Fifth Ward CRC for their hard work and continued dedication to the revitalization of the Fifth Ward, and thank them again for honoring the legacy of Barbara Jordan.  To learn more about the Fifth Ward CRC, please visit their website at http://www.fifthwardcrc.org/ and their Facebook page here.

Posted by Barbara Jordan Archives at 7:36 AM No comments:


It's October, and that means it's American Archives Month! 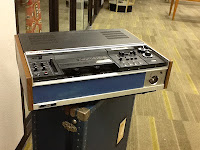 American Archives Month, established by the Society of American Archivists in 2006, is a collaborative effort by professional archivists and archival repositories around the
nation to highlight the importance of materials and records of enduring value--this includes things like photographs, manuscripts, letters, newspapers and advertisements, family records, business records, diaries, audio/video footage, artwork, trophies, etc.

American Archives Month affords the Barbara Jordan Archives the opportunity to highlight some of the more rare and unusual materials in the collection that fall outside of the typical paper manuscript and photographs commonly found in many archival collections.  For example, the most unusual (and certainly the heaviest) item in the Jordan Archives is a 1970s JVC videocassette recorder, complete with a steel-cornered traveling trunk.  These video recorders were among the first to be produced for use by the general public; up to then such equipment was only available to television stations or the wealthy. This particular model recorded and played back 3/4-inch U-Matic tapes, the forerunner to the more common 1/2-inch VCR tapes that most people born before 1990 are familiar with.  It's not known exactly what Jordan's purpose for owning such a machine, though Jordan was known for paying close attention to current issues discussed on political pundit shows (CBS Sunday Morning, Meet the Press, or the MacNeil/Lehrer Report, for example); in the days before 24-hour cable news channels and the internet, it's likely that Jordan wanted to keep as connected as possible to the political news of the day.  And there are over 100 U-Matic tapes in Jordan's collection (currently being prepared for digitization) that attest to the fact that the machine was indeed put to use.

What makes this piece of equipment so unusual is that Jordan apparently traveled with it (the protective case still has an identification label affixed to the front), which is even more impressive considering the size and weight of the machine. The recorder alone is about 40 pounds, while the wood and metal case adds at least another 60 pounds, and the case itself measures roughly 2 feet by 3 feet by 1 and 1/2 feet.  One could surmise that the recorder must have been an important tool for Jordan for her to purchase one and then to travel with it, at what must have been a considerable cost.