On this date in 1975, President Gerald Ford signed the Reauthorization of the Voting Rights Act. Barbara Jordan was heavily involved that reauthorization process, because one of the core issues surrounding voters at the polls was the discrimination of non-English speaking voters that was happening in Texas.  The story of Jordan's involvement is complicated but fascinating, and Jordan always cited the passage of this Act as one of her career highlights.  Learn more about the Act at the links below:


Posted by Barbara Jordan Archives at 11:46 AM No comments: 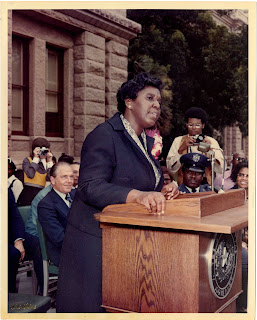 June 10, 2015 marks 43 years since Barbara Jordan received the honor of Governor For a Day in the state of Texas.  And to date, she is still the only African American woman to hold the title of Governor of state, even if it was for just one day.

In 1972, having served three terms in the Texas Senate, Jordan was elected president pro tempore (a Latin phrase meaning “for the time being”) of the Senate.  The president pro tempore is legally third in succession to the governor’s office, so what this meant was that Jordan was the first African American woman to preside over a legislative body in the United States and the first African American ever to preside over the Texas Legislature.  To make it official, Governor Preston Smith and Lieutenant Governor Ben Barnes both made arrangements to be out of the state for Jordan’s historic date, June 10, 1972.

The ceremony took place at the state Capitol in Austin.  Jordan, sworn in by her former TSU classmate Judge Andrew Jefferson, was surrounded by her family and friends.  Colleagues and well-wishers from all over Texas, including Delta Sigma Theta sorority sisters, bands, and choirs all came to celebrate Jordan’s historic moment.  One of Jordan’s official acts as Governor was to designate September 1972 as Sickle Cell Disease Control Month.

Jordan stated:  “I want you to celebrate this day as a new day of new commitment when a new idea and a new sense of future is to be born in Texas, a new commitment that Texas will not tolerate different based on race, a day when Texas will fight injustice and inequality whenever it finds it. “  Jordan’s triumph, however, was marked with tragedy.  Shortly after Jordan was sworn in, her father, Benjamin Jordan, suffered a stroke and was rushed to a local hospital where he died the next day.  Jordan later remembered the last time she spoke to her father: “I walked into the room and there he was with all his teeth showing.  Just the most wonderful smile imaginable…I said, ‘Chief, you almost made the day…but you got to see me be governor.’  And he was still grinning.”

To see a slide show of the day's events and to hear Jordan's speeches, watch the video link below.

Posted by Barbara Jordan Archives at 2:40 PM No comments:

As we celebrate another term's end at Texas Southern University and graduation is upon us, we also think of Jordan and her academic achievements.  The Houston-born and -educated Jordan (at least until law school) was the recipient of over 30 honorary doctorates, the first given to her when she was only 10 years out of law school.  Jordan's family stressed the importance of an education to Barbara, and she in turn stressed that importance to her own post-Congressional classrooms at UT-Austin decades later.

Happy graduation day to our students at Texas Southern University and beyond!


Posted by Barbara Jordan Archives at 6:26 AM No comments:

February 21 marks the 79th birthday of Ms. Jordan.  In honor of the occasion, here's some not-often seen and candid shots of Jordan enjoying herself.  We often think of the public face of Jordan and her serious demeanor and no-nonsense presence.  But she was also a woman who also loved to laugh, had a great sense of humor and was adored by those who knew her intimately.

Today marks the 62nd National Prayer Breakfast.  The National Prayer Breakfast (which is really a series of meetings, luncheons, and dinners) is a yearly event held in Washington, D.C., on the first Thursday of February each year, and has taken place since 1953.  Barbara Jordan had the honor of leading the prayer in 1978.  Here are some artifacts from her appearance.

Posted by Barbara Jordan Archives at 7:03 AM No comments: