A Thank You from Cesar Chavez 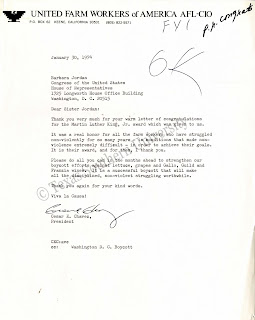 Here’s an interesting find—a signed letter from Cesar Chavez to Jordan, dated January 30, 1974. Nearly 37 years ago, Chavez wrote this letter to Jordan in response to the congratulatory note she sent when Chavez received an award. Chavez was a Mexican-American farm worker, labor leader, and civil rights activist who was a cofounder of what is now known as the United Farm Workers (UFW), one of the foremost labor organizations in America today. In 1967, Chavez and the Texas affiliate of the UFW staged a march from the Rio Grande Valley to Austin to protest poor working conditions and low wages, asking for the passage of a minimum wage law. Jordan met with Chavez and the other workers, promising a hearing on a fair wage bill in the Texas Senate, and Jordan did co-sponsor a bill with Texas Senator Joe Bernal. While that particular bill died in committee, Jordan continued to work to get minimum wage laws successfully passed in Texas later in her Senate career. Chavez and Jordan shared an affinity and a vision for trying to make things better for all disadvantaged Americans.

Posted by Barbara Jordan Archives at 11:41 AM No comments: 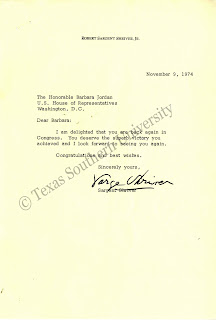 The Barbara Jordan Archives contains thousands of pieces of correspondence from people who wrote to Jordan—mainly Jordan’s constituents—on a variety of topics, ranging from current issues, persons requesting assistance with legal or personal problems, requests for autographs and photos, and even fan mail. While most of Jordan’s correspondence is from the everyday people she represented in Washington, she also heard from many famous and influential people, both in and out of politics. Here’s a letter from Sargent Shriver, who died on January 18, 2011 at the age of 95. Shriver was married to Eunice Kennedy, sister of President John F. Kennedy. Shriver was the former Ambassador to France, a director of the Peace Corps, and a running mate to George McGovern in the former’s unsuccessful Presidential bid in 1972; Shriver himself ran for President unsuccessfully in 1976. Shriver was also the father of news correspondent and journalist Maria Shriver (otherwise known as Mrs. Arnold Schwartzenegger and former first lady of California). Shriver took the occasion to write Jordan a congratulatory letter upon her reelection to Congress in 1974.

Posted by Barbara Jordan Archives at 1:23 PM No comments: 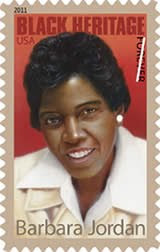 The United States Postal Service (USPS) issued a press release a few days ago announcing the publication of a postage stamp honoring Barbara Jordan. It is the 34th stamp issued as part of the USPS "Black Heritage" series, which includes such notable and influential figures as Harriet Tubman, W.E.B. Dubois, Malcolm X and Ella Fitzgerald. You can read the press release from the USPS about Jordan's stamp here.
The Barbara Jordan Archives has had the honor and privilege of working with the United States Postal Service on this project, and we are excited to take part in such a historical undertaking and celebration of Jordan's life and accomplishments. (Note: stamp image copyright USPS and artist Albert Slark, 2010.)
Posted by Barbara Jordan Archives at 6:25 AM 3 comments: