Jordan Exhibit at the State Capitol 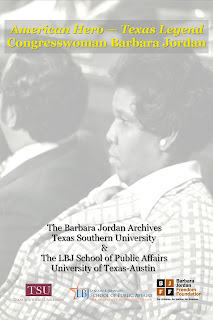 In honor of Barbara Jordan Week and Jordan’s 76th birthday, the Barbara Jordan Archives, in conjunction with the LBJ School of Public Affairs at UT-Austin, the Barbara Jordan Freedom Foundation and Senator Rodney Ellis, has installed an exhibit entitled “Congresswoman Barbara Jordan:  American Hero, Texas Legend” in the ground level rotunda at the Texas State Capitol.  A ten-by-twenty foot timeline and over a dozen panels tell Jordan’s story from her beginnings in Houston,  to her achievements in both the Texas Senate and the U.S. House of Representatives, to her teaching career at UT-Austin and to her untimely death at age 59.   The purpose of the exhibit is to both salute the incredible career and achievements of Jordan for those who remember her time in the public eye, and to educate people (especially the young students and scholars of Texas) about a real-life Texas hero.  The exhibit will run through February 24, 2012.
For those who will not be able to see the exhibit in person, we have created an online version of the exhibit.  You may view the slide show by clicking here or view and download a full-color PDF version by clicking here.  We hope you enjoy the exhibit!
Posted by Barbara Jordan Archives at 2:18 PM 1 comment:

February 21, 2012 marks what would have been Barbara Jordan's 76th birthday.  In honor of the occasion, there are several events the Barbara Jordan Archives would like to make you aware of.  The 82ndTexas Legislature has designated the week of February 21-27 as Barbara Jordan Freedom Week, (week of February 21 -27), and with the assistance of the Barbara Jordan Archives at Texas Southern University, the Barbara Jordan Freedom Foundation, the Lyndon B. Johnson School of Public Affairs at University of Texas-Austin and the generosity of the Tocker Family Foundation, an interactive timeline and panel display highlighting Jordan’s life and achievements will be installed in the ground floor rotunda of the Texas State Capitol.  We are very excited about the exhibit as it incorporates many photographs, documents and artifacts from the Archives.  The exhibit will be open from Tuesday, February 21 – Friday, February 24.  Read the press release here.
Also, the Lyndon B. Johnson School of Public Affairs at University of Texas-Austin is also hosting a week-long series of events for Barbara Jordan Week, including speakers, brown-bag discussions and workshops, all related to Barbara Jordan and topics such as voting, racial barriers, and social justice. Read more about the LBJ School events here.
Next week, we will post a virtual version of the capitol exhibit so those of you who will not be able to visit the exhibit in person will have a chance to enjoy it and learn more about the life and triumphs of Barbara Jordan.
Posted by Barbara Jordan Archives at 7:59 AM No comments:

The Association for the Study of African American Life and History (ASALH) has designated “Black Women in American Culture and History” for the official theme of Black History Month 2012.  In observance of this year’s theme, the Barbara Jordan Archives takes a look back at Congresswoman Barbara Jordan's work with the Equal Rights Amendment in a virtual exhibit.

Jordan was one of only two women in the Texas Senate in 1969 (along with Frances “Sissy” Farenholt in the House) when Congress yet again debated an Equal Rights Amendment. The two women banded together to cosponsor passage of the ERA in Texas, and then decided to propose an equal rights amendment guaranteeing equal rights for women to the Texas Constitution. Jordan continued to speak out on the ERA and the importance of its nationwide passage throughout her Congressional career--for instance, Jordan worked on legislation such as a bill to provide Social Security benefits for homemakers.  And during her last term, Jordan joined with her fellow Congresswomen to fight for an extension of the ERA ratification process that was due to expire in 1979.
To learn more about the Equal Rights Amendment and the role Jordan played in the debates, click here for the virtual exhibit.
From the Barbara Jordan Archives--happy Black History Month!

Posted by Barbara Jordan Archives at 10:37 AM No comments: