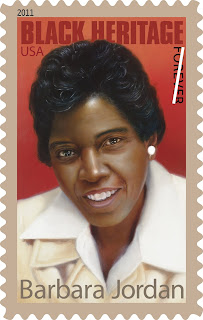 It's been a long and busy summer for us here at the Barbara Jordan Archives.  We've been preparing for the fall semester as well as for some exciting events happening very soon!  As we mentioned some time back, Congresswoman Barbara Jordan is being honored by the United States Postal Service with a commemorative stamp as part of the Black Heritage series.  The official unveiling and First Day of Issue ceremony will be held on Texas Southern University's campus at the Granville Sawyer Auditorium on Friday, September 16, 2011 at 11am.  For reservations, please call 1-866-268-3243 no later than September 9.  Stamps will be on sale at the event, so be among the first to own a piece of Texas history!  As part of the celebration, the Barbara Jordan Archives will have several displays highlighting artifacts and memorabilia from Jordan's collection, so be sure to stop by the archives at the Robert J. Terry Library (next door to the Sawyer Auditorium) after the ceremony!  In addition, the Houston Philatelic Society will be exhibiting and selling the Jordan stamp as part of their "First Day of Sale" activities at the Greater Houston Stamp Show in Humble the weekend of September 16-18, 2011. For more information, click here. 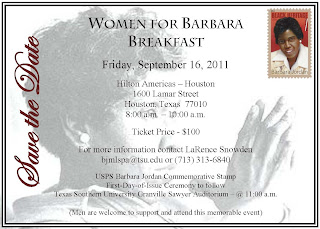 And as if that were not exciting enough, the Barbara Jordan/Mickey Leland School of Public Affairs at Texas Southern University is hosting a "Women for Barbara" fundraising breakfast at the Hilton Americas - Houston on Friday, September 16 from 8-10am, just prior to the stamp unveiling at TSU.  Tickets range from $100 to $250, and the proceeds will go towards scholarships for TSU students.  Click here to make your reservation.

Also, we will be celebrating Congress Week again this year from September 12-16, 2011, sponsored by the Association of Centers for the Study of Congress.  The ACSC is a professional organization of archivists and curators who maintain archives and collections of political movers and shakers throughout American history.  The Barbara Jordan Archives was represented at the ACSC meeting in Washington, D.C. this past May at the National Archives; a short presentation was given about the timeline exhibit that was installed at the BJ/ML School of Public Affairs this past February and March.  This year, we will again honor Jordan as well as four other TSU graduates (Mickey Leland, Craig Washington, Hank Johnson, and Al Green) who all went on to become U.S. Representatives--quite a feat for a school that's been in existence for less than 100 years!  We will have an exhibit in place at the Robert J. Terry Library's Special Collections during that week so you can learn more about these five great alums.
Posted by Barbara Jordan Archives at 2:36 PM No comments: