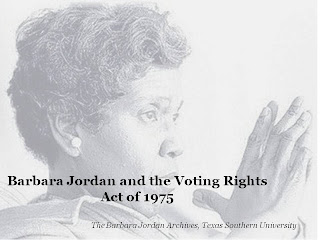 It's been a while since we've had an update--things have slowed down a bit with the archives since the 75th birthday celebration and progression of the semester here at TSU. That said, we are looking forward to the postage stamp unveiling which will happen sometime this fall (location is still to be determined, we'll keep you posted).

In the meantime, in honor of Cinco de Mayo, we wanted to create an exhibit that told the story of Jordan's involvement with the Voting Rights Act of 1975. This legislation was an extension of the Voting Rights Act of 1965, which essence prohibited states from using poll taxes, literacy tests, "grandfather clauses," or gerrymandering in elections--these were typical tactics used to deny or curtail the voting rights of US citizens on account of race or color, particularly in the Southern states. When the Act was due for reauthorization in 1975, Jordan became interested in extending voting rights to Mexican American voters, chiefly due to the interest of her staffers Bob Alcock and Bud Myers, who were connected with many civil rights lobbyists in Washington. They brought to Jordan's attention the fact that Mexican American voters were having difficulties with voter blocking and intimidation in many parts of the U.S., particularly in areas with high concentrations of Hispanics--including Texas. Texan attorney Paul Cedillo, Jr., also brought to Jordan's attention an incident involving voter intimidation at a school board election in Rosenberg, Texas in 1975, sending her affidavits from Mexican American voters who were turned away from the polls for a variety of reasons. Jordan had a personal interest in the issue as she had connections to MALDEF, LULAC, and had even assisted Cesar Chavez during a 1967 protest in Texas over minimum wages for migrant workers; in addition, her chief aide Bob Alcock’s mother was a Mexican native, so the issue of voting rights for Mexican Americans hit close to home for Jordan.

Jordan decided the time was right to amend the Voting Rights Act to not only include Spanish-speaking citizens, but other language-minority voters--and to make sure Texas, which was excluded from the Voting Rights Act of 1965 in terms of voting fairness for language-minorities was included in the reauthorization. Please visit our online exhibit at Flickr to learn more: English version or En Español (note: you can pause any slide at any time by clicking the pause icon at the bottom left of the slide show). Or, if you're in the Houston area, please visit us at the Robert J. Terry Library's Special Collections, and you can see our exhibit in person through the month of May.

Posted by Barbara Jordan Archives at 7:27 AM No comments: