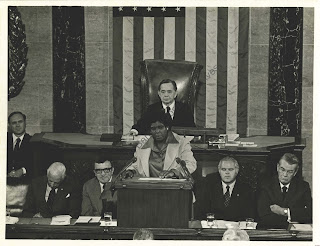 February 21, 2013, marks what would have been Jordan's 77th birthday. Though we are past the 76th year mile marker by one year, we thought it would be fun to mark the occasion with some rare images from Jordan's participation in the Constitutional Bicentennial (1776-1976) planning events.  Jordan was active in fundraising and promotion for both national events and Texas state events for the Bicentennial. Below are images from Jordan addressing the House of Representatives in 1974 concerning the upcoming Bicentennial  (including a rare color image of Jordan at the podium), and a shot of a 1976 commemorative medal given to Jordan and other Congressional members that is housed in the archives museum. 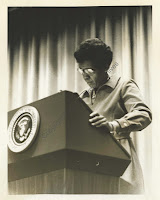 Today is the 61st annual National Prayer Breakfast. The event, which is actually not just a breakfast but a series of meetings, luncheons, and dinners, was established in 1953 by President Eisenhower. The Breakfast is designed to be a forum for political, social, and business leaders to assemble and build relationships with each other. Every president since Eisenhower has spoken at the National Prayer Breakfast, and over the years the event has inspired many communities (civic, religious, and political) to hold similar events.

Jordan attended the 1978 event (presided over by President Carter) and offered the Prayer for National Leaders. 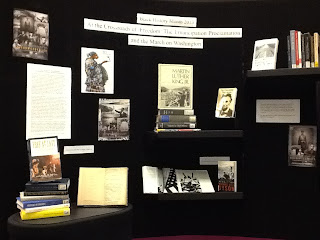 This years's theme for Black History Month is "At the Crossroads of Freedom and Equality: The Emancipation Proclamation and the March on Washington."  2013 marks the 150th anniversary of both the signing of the Emancipation Proclamation by President Abraham Lincoln, and the 50th anniversary of the historic "March on Washington for Jobs and Freedom."  The Association for the Study of African American Life and History (ASALH) developed this year's theme with the idea that these two events, so many years apart, are connected and converge under the common threads of freedom, equality and justice.

TSU's Special Collections and the Barbara Jordan Archives have installed a few exhibits at the Robert J. Terry Library to celebrate Black History Month.  Our exhibits (featuring books, documents, periodicals, newspaper articles and photographs from Special Collections) will remain on display through the month of February.  Our main exhibit on the library's first floor features videos from the National Archives that discuss the role of the National Archives in preserving the history of both the Emancipation Proclamation and the March on Washington; one of the videos is a series of rarely-seen newsreel footage of the March, featuring music by Joan Baez and Marian Anderson, as well as footage of Dr. Martin Luther King's historic speech.

We invite you to stop by the library to see the exhibits.   For those of you who cannot come in person but would like to see the videos from the National Archives, please visit the links below:

The March on Washington in Photographs

The March, part one

Posted by Barbara Jordan Archives at 7:10 AM No comments: